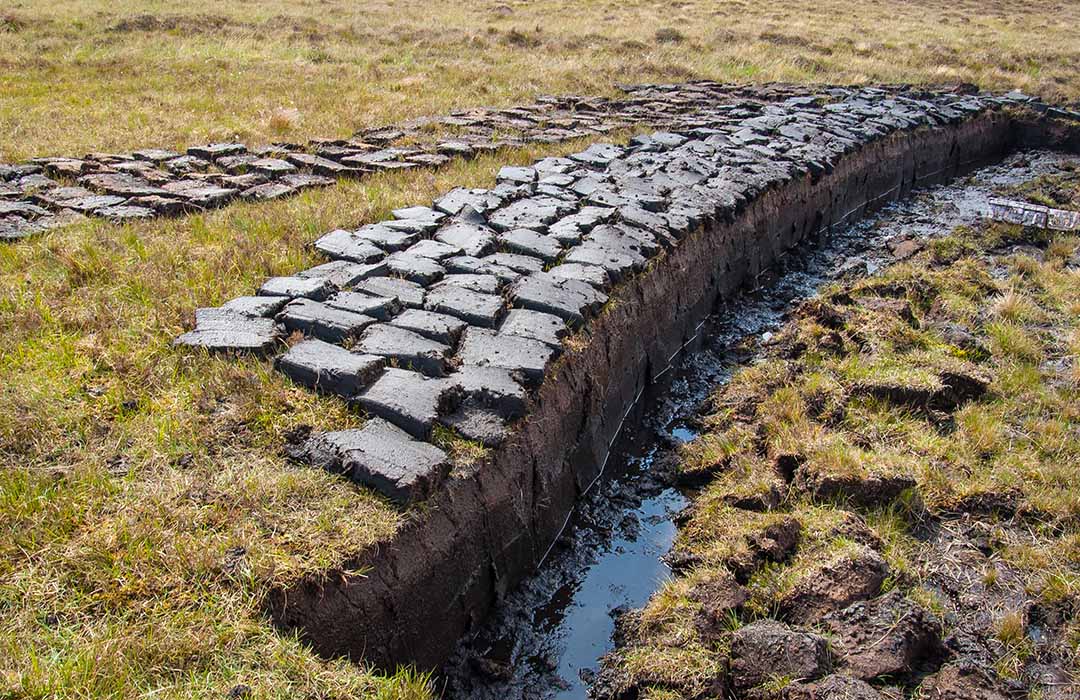 There are five official and one unofficial whisky regions of Scotland. Islay is the best known of all the regions for big, bold, smoky peat flavoured whiskies although peaty whisky does come out of other regions too.

In this article we’re going to explore the use of peat in whisky production and talk about the Scotch whisky peat scale.

Let’s start from the beginning and discuss what peat actually is.

Peat is made from partially decomposed plant remains – grasses, mosses and heather which has been in a water logged environment and starved of oxygen. This is a completely natural process and is the first stage of plant matter turning into coal.

There are various layers in a peat bed with the softest, youngest peat on the top and the hardest, oldest peat on the bottom. It’s this bottom layer that is the closest to becoming coal, albeit in 10,000 years or so!

The very top, soft layer is mainly used for horticulture purposes as it promotes plant growth and isn’t generally used in whisky production. The next level down is used though as it contains a lot of roots and it’s these roots that provide most of the flavour when used in the whisky production process.

The surrounding environment of a peat bed shapes the flavour of the peat and ultimately the whisky. This along with many other factors give us the wonderfully diverse range of Scotch whisky flavours available to us as consumers.

After the peat has been cut, it is dried out and then used in the distillery kiln to start the drying and flavouring process of the malted barley.

The malted barley is laid out on the kiln floor 15 – 18″ deep and the kiln fire burns the peat below causing the smoke to rise up through the grain, drying and flavouring it as it goes. The flavouring process typically lasts for 12 to 15 hours depending on atmospheric conditions.

It’s not just the burning of the peat that flavours the whisky, it’s also water that’s used in the process. All distilleries use a nearby water source and this water also contains peat and is though to contribute around 15% of the final flavour of the whisky.

The two short videos below by the Laphroaig distillery explain more about how the water source and kiln process add a massive amount of flavour to whisky.

The affect of peat (ie the peatiness or smokiness) on whisky is expressed as phenol parts per million (PPM). Phenol is a chemical that is produced when peat is burned and during the drying process described above, the malted barley soaks in the phenol which flavours the grain.

In some cases, you will see in product descriptions when shopping for whisky the PPM quoted. In the main, what’s quoted is the PPM of the malt before any mashing or distilling has taken place. During the various processes and maturation time, the PPM will reduce and the PPM in the final whisky is usually around 30 – 40% of what it was in the malt.

The following guidelines can be used to help you determine how peaty a whisky might. It is worth noting though that some whiskies can taste more peaty or less peaty than what they actually score on the chart. Laphroaig is an example of a whisky tasting stronger than it scores.

Even ‘unpeated’ whiskies contain phenols but the levels are so low (1 – 3 PPM) that it’s almost undetectable.

Anything from Islay is likely to be smoky and peaty but perhaps the best known brands for this type of whisky are:

Whiskies at Different Points on the Scale

Here are some examples of different peated whiskies at varying strengths. We start with the super lightly peated Bunnahabhain 12 year old at 3 PPM, then to the 12 year old Highland Park at 20 PPM, then we have the heavily peated Ardberg 10 year old at 55 PPM and at the far end of the scale the monster that is the Octomore Edition 07.1 at a massive 208 PPM.