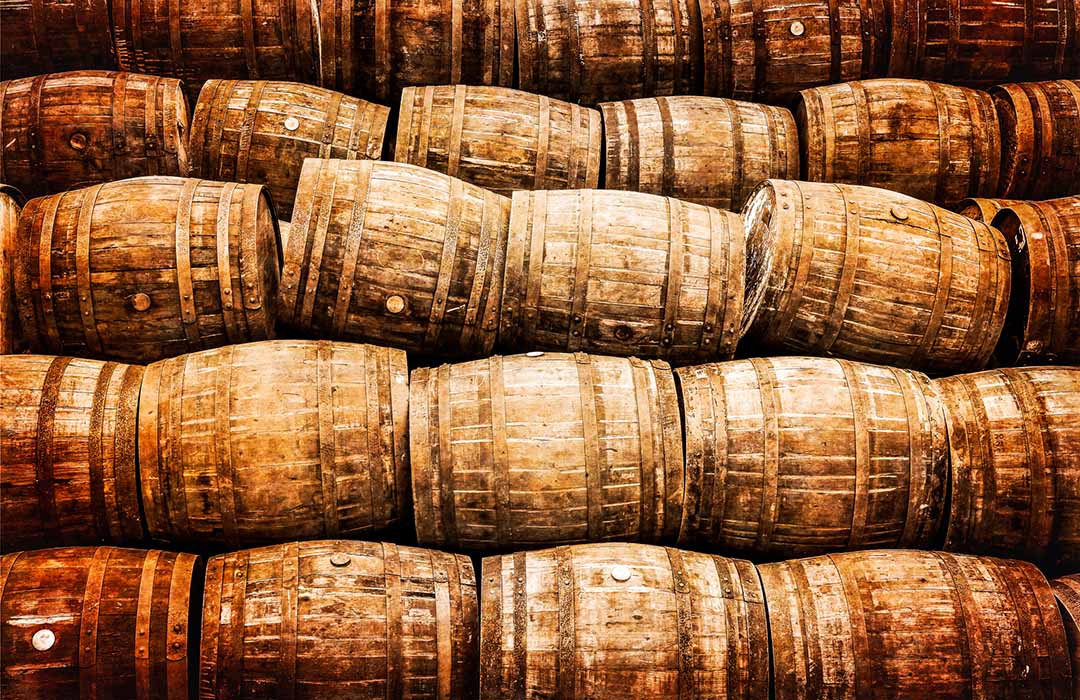 Fermented and distilled spirits have been around for 4,000 years. Cuneiform from Ancient Babylon makes mention of them. Every culture around the world, from Egypt, China, and India, to the Greeks and Romans – all the way to modernity have enjoyed imbibing alcohol.

Whisky is considered by many to hold a lofty position among spirits. Even a wine snob will admit that great whisky is something to be savored – especially if it’s good Single Malt Scotch. Scribes rightfully extol the virtues of whisky.

In this article, we take a slightly different tack, describing 15 interesting facts that may whet the appetite to learn more about your favorite drink.

Alcoholic spirits were introduced to Britain by the Romans, probably as early as the 13th century. They called it “aqua vitae” (“water of life”, referring to distilled spirits) in Latin. The first mention of whisky is found towards the end of the 15th century. It descended from the Scots Gaelic “Uisge beatha”, later translated to “uske” before it reached the modern name.

2. Scotch was not the first choice for a long time, Irish whisky was

Though Scotch – especially Single Malt – unquestionably holds pride of place right now, that was not always the case.

Before the 1920s, vintage Irish whiskies such as Jamesons and Old Bushmills were much better known. In the late 19th century, the big Irish distilleries even sought to distinguish themselves from upstart Scotch blends. As an appeal to Irish identity, they adopted the use of an “e” in the spelling (calling it “whiskey”), going back to the Irish Gaelic version of the name. It was only in the post-World War I period, when Irish Independence and Prohibition in the US tanked the market for Irish whiskey, that Scotch firmed up its status as the premier whisky world-wide.

3. An incredible one billion bottles of whisky are produced in Scotland every year, but 90% of it is exported

Scotland has more than 120 distilleries, many of which focus on a single brand of production, or at best a limited number of brands. There are more than 5000 expressions of Single Malt Whiskies.

Ultimately, the annual combined output from the country is an amazing one billion bottles a year, but 90% of the stock is exported – given that the population of Scotland is around 5.5 million. Luckily, both Single Malt and blended Scotch whiskies are in demand all over the world.

4. The leading drinkers of whisky in the world are the French

In aggregate, India consumes the largest amount of whisky (1.5 billion litres) in the world. The US is next with 460+ million litres, followed by France with 140+ million.

This is, however, a bit misleading, since the population of both the US and India are much higher than France. On a per-capita basis, France leads the field with 2.19 liters of whisky drunk per person, followed by Uruguay (1.77 liters) and the US (1.4 liters).

India has a large segment of their population who do not drink alcohol, which accounts for why they are only ninth on this list with 1.24 litres drunk per head. This underscores the popularity of whisky – even the French, who are noted oenophiles, love it!

5. French consumption now does not hold a candle to Americans in the early 19th century

6. The highest priced whisky sold at an auction for $1.9 m

The single most expensive bottle of whisky ever sold is Macallan’s Fine and Rare 60-Year-Old 1926, which was sold at auction for $1.9 million in October 2019.

7. Before that, the most expensive “Scotches” were all Japanese!

By law, Scotch whisky must be produced within Scotland. So not many whiskies produced in other countries are regularly called by that name. The exception is Japan, whose whiskies are often called Scotches. In fact, before the Macallan sale for $1.9 million, a trio of Japanese Whiskies were setting regional and world records, as described below:

Japanese whiskies often retail at prices comparable to, or even higher than, premium Scotches. Marketing is a factor, but the main driver may be the dearth of mature stock.

There was a significant slowdown of whisky production in the country during the mid-’80s. Many Japanese distilleries curtailed production, some went under. As a result, there is not much aged whisky stock, even with the large players. As an illustration, the Karuizawa sale above was likely influenced by the fact that the distillery had been closed for more than 15 years, making its stock precious to a collector.

8. Talking of the Japanese, they learned how to make whisky from the Scots

People say that Japanese Whisky is “eerily like Scotch”. There is a good reason for this. While the Japanese have been distilling and consuming alcohol (sake or sochu, anyone?) for hundreds of years, whisky making in Japan did not take off before a young student, Masataka Taketsuru, visited Scotland to learn the art of Scotch whisky making.

When he and his Scottish wife Rita returned, they teamed up with Shinjo Torii (the owner of Suntory) to open the fabled Yamazaki Distillery in 1923. A decade later, Masataka opened his own distillery, Nikka. Even now, Suntory and Nikka represent the two largest brands in Japan.

The wheel came full circle when Yamazaki’s 2013 Single Malt Sherry Cask was named the best whisky in the world. Japanese whisky has its own distinctive flavor, but as mentioned above, it’s the one whisky produced outside Scotland that is often referred to as Scotch.

9. The oldest whisky around is 160 years old

Appropriately, the oldest whisky currently available in the world, per the Guinness Book of World Records, is a Scotch – the Glenavon Special Liqueur Whisky was bottled between 1851 and 1858, making it about 160 years old. The distillery closed in the 1850s, so the brand is rare. A bottle of the whisky, which holds only 14 ounces (around 400 ml), has retailed for around €15,000 at special auctions in the past 15 years.

10. Whisky starts out by being Beer

You may not know that the first stage of fermentation, after yeast is added to the grain mash, usually produces a wort that is nothing but beer with 8-9% Alcohol by Volume (ABV).

During this stage, the organic materials and carbohydrates decompose, producing ethanol (C 2 H 5 OH) along with by-products such as methanol (CH 3 OH), a number of congeners, and carbon dioxide.

Successive rounds of distillation are needed to set the final distillate on the path to becoming whisky. To learn more about the distillation process, Whisky Ride has produced a great guide.

11. Whisky distillers’ obsession with copper makes sense for the consumer

One of the innovations brought in by Aeneas Coffey in the mid-19th century was the invention of the continuous still (a process that is also replicated with column stills). This heralded the age of mass manufacturing cheap grain alcohol.

Another experiment in cost reduction was to try out stainless steel (instead of copper) as a cheaper material for both pot and continuous stills. However, the new stills produced distillates with a noxious, sulphury odour which would not go away. Scotch and other whisky manufacturers rediscovered their affinity for copper through this experiment – it turns out that copper reacts with the distillate to remove impurities and sulphrous residues (and odours).

12. Whisky does not get darker than pale gold even after aging – artificial colouring is often needed

Though purists say that Single Malt Scotch should not have any artificial elements in it, the fact of the matter is that the amber coloration we see is produced by E150a caramel colouring for most Scotch whiskies.

The distillate that comes out is colourless. The aging process in oak barrels imparts colour to the liquid – but even a long stay in the barrels rarely gets the liquid darker than a golden hue. So, most of your favorite brands are likely mixing in caramel coloring to produce something more consistent with your expectation.

There are a few exceptions, such as certain expressions from the Ardbeg (Corryveckan and Uigedail) and BenRiach (Albariza 18 Years, Dunder 18 Years and Latada 18 Years) distilleries.

When whisky is aged for a long time in oak barrels (it’s common for Single Malt Scotch to stay in for 12 years or more), a certain volume evaporates through the porous wood during that period.

This lost amount is quaintly called “angel’s share”. A standard barrel could lose as much as 30 to 40% of the initial volume placed in it by the time the whisky is deemed ready for bottling. One effect of this is an increase in price since there is less whisky per barrel available for sale.

Some 30 US States have a designated state beverage. The most common drink is milk (or flavored milk), though citrus juices such as orange and cranberry are also found.

Only one state, Alabama, has the distinction of having a spirit as its official beverage. Alabama’s state drink is Conecuh Ridge Alabama Fine Whiskey – a Prohibition Era Moonshine.

The House Joint Resolution passed during this designation stated this whiskey embodied the “family pride, independence, entrepreneurial drive, innovation and respect for the tradition and craftsmanship which is evident in this family tradition”.

Every year, the iconic whisky from Scotland is celebrated over the world through observing National Scotch Day. Enjoy your own brand with family and friends or go on a tasting tour to celebrate.