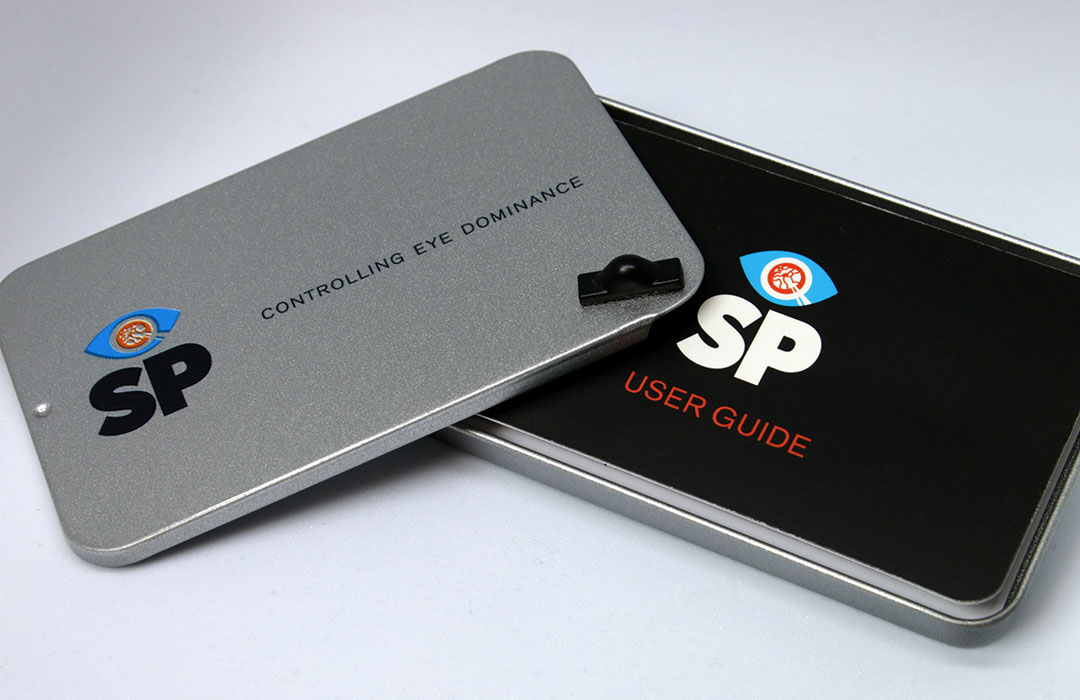 Shoot SP Review: Start to Shoot with Both Eyes Open

I’ve written about my troubles with eye dominance before. I have central vision (once described by an instructor as the most severe case of central vision he’d ever seen!) and the issue that it causes is essentially seeing ‘double vision’ as I look down the rib of the gun. I see two barrels of close to even transparency as both my eyes fight to become dominant.

Over the years I’ve tried multiple ways to fix this. Here’s what that journey looked like.

If my left is closed then it’s out of the equation and my right eye obviously takes over. I see one barrel and problem solved. However, closing one eye means that your brain becomes less able to accurately calculate speed and distance – two pretty important measures when trying to shoot a moving target.

Although this solved one problem, it caused another.

Mount, call pull, and when entering the break zone close my left eye

This solution was recommended to me as a ‘best of both worlds’ type scenario. Both eyes were used to help my brain calculate the speed and distance of the clay but by closing my left eye just before pulling the trigger, the right eye becomes the dominant one and I only see the one barrel.

In theory, this sounds like the perfect solution. In practise, it was a bit different. Firstly, when trying to shoot using a method such as the ‘pull away’ method where you lock onto the target and move with it before pulling away to apply the lead, I could still see two versions of the barrel and as each eye was fighting to become dominant, it left me panicking that I was tracking the clay with the correct one. As we all know, when too much thinking is going on and it takes over the instinctive, intuitive side of shooting things start to go wrong.

Another problem with this method was that when I did shut my left eye just before pulling the trigger, the sight picture changed which for a split second caused me to pause which ruined my swing.

Patch of tape over the left lens of my shooting glasses

This was my favoured solution for some time. By applying a small piece of translucent tape over the left-hand lens of my shooting glasses, it removed the ‘double vision’ effect yet still allowed me to see more of the sight picture than shutting one eye. I do still like this solution and Malcolm Dunn, the CPSA instructor who runs our online shooting course Shotgun Shooting Success teaches this method in one of the lessons and uses it himself with great success.

Me being like a dog with a bone though meant that I needed to try other solutions out there before settling on something I’d use for the long term. I’d seen other products on the market so wanted to try them out just to satisfy my curiosity which led me onto my next experiment.

I did quite a bit of online research (as I suspect you are doing now) before buying one of these. The opinion seemed quite mixed with some saying it didn’t help them but then others singing its praises and that it transformed their shooting. It made sense for me to take a chance and give it ago, just in case I ended up being in that ‘superfan’ group of people at the end of my trial with it.

They work by essentially adding a bright dot at the end of your barrel which only the eye looking straight down the barrel can see (ie the eye at the same side of your body where the shoulder is in which you mount your gun). The theory is that by only having one eye see the bright dot, it’s forced to become dominant and there’s no confusion about which barrel (if you see two) you should be tracking the target with.

Again, in theory, this sounded fantastic. I ordered it convinced that it would work well for me. As it turned out, my shooting went backwards compared with the tape method. The bright dot was a bit too bright and I found myself looking at it as opposed to the clay which is a real no-no.

It didn’t last too long and I went back to the tape method which continued to work well.

For a while I was happy and I was pleased that I’d tried a few different solutions and had found something that seemed to do the job.

Out of the blue, I received an email from somebody called Steve, an engineer by trade. He’d read my eye dominance article and make contact because he’d been working with a Professor who had in-depth knowledge of sports-based eye dominance to design a product to finally solve the issues he’d been experiencing which were the same as what I’d had experienced.

This piqued my interest as this clearly wasn’t a fly by night type product and I had confidence in the fact that his professional background was in engineering and an academic was involved in the process which meant decisions will have been made on data and testing – two words that resonate hugely with me (I can be a bit of a data nerd!)

We had a chat on the phone about how it worked and a few days later I received a shiny looking tin with some instructions and what could only be described as a small plastic ‘button’ inside. I was even more intrigued.

To learn about the science behind how the SP works, the best thing I can do is to refer you to the fantastic article about it on the SP website. I would attempt to summarise it but in all honesty, I’d get it wrong and would end up sounding a bit silly – the best thing I could do was to fit it to my gun as per the supplied instructions and get out to the clay ground to give it a go.

Fitting the SP is straightforward. It comes supplied with double-sided foam tape and it’s just a matter of following the instructions (which are clear and helpful) to get the placement correct.

I ended up needing to mount mine on the underside of the top barrel as the gap between the top and bottom barrel wasn’t big enough to mount it there which is the recommended place. This doesn’t at all impact how it works and it’s so small that regardless of where it’s mounted, you can hardly see it unless looking down the rib of the gun and even where it is, it doesn’t catch on the material on the inside of my gun slip as I’m putting the gun in and out of it.

Putting it into action

It was time to head to the clay ground. Park Lodge in East Yorkshire was my ground of choice as I was on my own and their setup has a solo option.

When I chatted with Steve on the phone, he suggested that I start with a straightforward incomer so that’s exactly what I did. I shot gun-down but before pressing the button to release the clay, I dry-mounted a few times to engage my brain and get it seeing the SP with the right eye.

The clay was released and when it felt right, the trigger was pulled… Miss. I pulled the trigger again to have a go with the second barrel and this time I hit it. A 50% success rate with on the first clay out of the trap.

Time to move onto a different target to see how it fared there.

The next stand I went to was a going away bird. The same thing happened in that it took me a couple of shots to ‘get my eye in’ but after that, was hitting it consistently with the first barrel. At this point I was impressed. I have to admit, I didn’t fully understand the science behind how it worked but nor did I care as it was working and for me, that’s the main thing.

I moved on to a target I’ve shot before at Park Lodge, a going away target but from a raised platform which means that the target is underneath you – it’s good fun.

This was trickier and it took a bit of working out why I was struggling with it. It turned out that to make sure I saw the SP and I engaged my brain on it, I was starting with my gun too high which was messing up the shot.

Once I realised and corrected this, things started to fall into place and more success came my way.

It was time to try something a bit different.

This was a bit of a tough one with the way that it flew. However, after a bit of practise I was hitting them although it took the second barrel to see a broken clay on some of the shots. I wasn’t concerned though, this was the first time out with the SP and me shooting with both eyes open – I have no doubt that without the SP on my gun, my success would have been much more limited.

I wanted to finish the session with another incomer, just to see how I reacted going back to it after shooting a variety of targets between the first incoming target and this one.

It turned out that I reacted well. There was no period needed of getting my eye in with the first few shots and I hit them all with the first barrel.

These were all fairly straightforward targets and I need to get back to the clay ground to put some time into experimenting with driven targets and crossers.

That being said, the early signs have excited me greatly. Never before have I been more confident shooting with both eyes open and we all know how much confidence really contributes to more successful shotgun shooting.

I really appreciate Steve getting in touch and introducing me to the SP.

If you want to try it for yourself to see if it can help you to overcome your eye dominance issues, they can be purchased directly from the Shoot SP website.