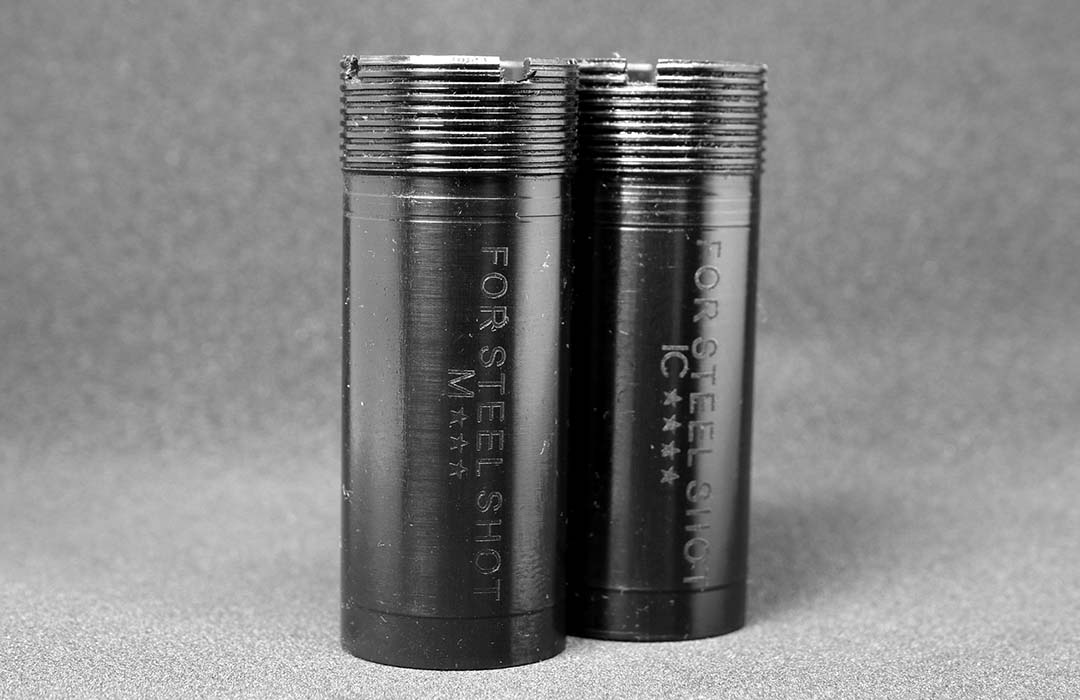 Improved Cylinder vs Modified Chokes – What is the Difference?

Back in 2018, we wrote a top-level overview of shotgun chokes. It’s a really popular piece and it is there to provide some basic information on what choke does and what common sizes and markings are available.

Over the coming months, we’re going to get more specific and drill down further to cover the topic in more depth, starting with specific sizes.

In this piece, we’ll be exploring the differences between improved cylinder and modified chokes. We’ll explore the origins, when each one might be used and the differences from country to country.

Let’s dive a bit deeper though and learn a bit more about each one. We’ll kick-off with improved cylinder.

The first thing to mention is that in both the UK and the US, improved cylinder choke is commonly used but they’re not the same thing.

The exact year that improved cylinder chokes became commercially available is unclear. What is clear though is that shotgun choke was being talked about and experimented with as far back as the early 19th century. Patents were filed in both the US and the UK in 1866, and from the late 1870’s the concept really started to take off.

As mentioned above, the actual constriction differs between the UK and the US version. In the US, the 12 bore constriction is 0.010” whereas in the UK it’s 0.005”.

Effective range is the distance at which the shot pattern remains viable to kill a target effectively (whether that be a clay target or a game bird).

Although there are differences in the UK and US designations, neither of them would be classed as tight chokes and therefore are more effective at shorter distances.

With this in mind, we’d recommend sticking to targets up to 30 yards with improved cylinder/quarter choke and if you want to shoot out to 40 yards, modified/half choke would be a much better option but we’ll look at modified/half choke in more detail shortly.

What is Improved Cylinder Good For?

Now that you know the effective range you know that you’ll be able to use it in scenarios where the distance you’re likely to be shooting at is between say 25 and 35 yards. Anything more than 35 yards and there will be a better choice of choke and similarly, if shooting at less than 25 yards then dropping down to a US skeet choke or even cylinder would make a lot of sense (confusingly with the UK designation you’d be dropping down to the UK version of improved cylinder or even true cylinder).

A typical sporting clay layout, decoyed pigeons, and walked up pheasant will all suit improved cylinder/quarter choke. For driven pheasant, it does depend on the topography of the land you’re shooting on which generally dictates how high the birds will be. This size choke is likely to be suitable for flat land shooting at up to 35 yards but for any higher birds, you will want to look at a tighter choke to achieve an effective pattern at those further distances.

This varies manufacturer to manufacturer so you should always refer to the handbook which came with your gun or contact the manufacturer/distributor to check.

Unlike improved cylinder, the name modified only exists in the US which should hopefully make things slightly less confusing. For reference though, if you are one of our UK based readers, the US modified choke is equivalent to the UK’s half choke but from here on in, we’ll refer to it as modified.

The 12 bore constriction of a modified choke is 0.020”. This is one choke tighter than improved cylinder and the two are commonly found together (go to any clay ground or game shoot in the UK and you’re likely to find a significant number of people with a quarter and half choke set up – the equivalent of improved cylinder and modified US).

Because modified is tighter than IC, the effective range is longer. You may or may not have picked up from the video shown earlier that at 40 yards, the pattern size of the modified choke was much larger than the IC choke so if you do need to shoot targets which are between 30 and 40 yards, the modified choke is the one to go for. 60% of the shot would be present inside a 30” circle at 40 yards, a difference of five percentage points when compared with the IC choke.

What is Modified Choke Good For?

As mentioned above, these two chokes are very commonly used in combination with each other. This is perfect for sporting clays, pigeon decoying, and for pheasant shooting. Think about which you might want to fire first though – remember that the effective range is different on these two chokes so the optimal setup will be different depending on whether the target is traveling towards you or going away from you.

It’s worth repeating that this varies manufacturer to manufacturer so you should always refer to the handbook which came with your gun or contact the manufacturer/distributor to check.

The table below shows the differences between both chokes.

So there you go! You now know the differences between these two choke sizes, how to identify them and when to use each one.

Look out for more upcoming content on the different choke sizes but in the meantime, happy shooting.

How do you Measure Shotgun Choke Size?

If your gun is fixed choke and you want to check the size, you can do it yourself using a brass choke gauge but these should only be used as a guide as sometimes, they’re not very accurate.

The best and most accurate way is to visit your local gunsmith who will measure it using a professional shotgun bore micrometer. They will also be able to advise on any modifications you might want to make to your gun.