Is Game Shooting Cruel? No! 7 Reasons Why Not

It’s easy to fall into the trap of thinking that most people, especially from towns and cities, don’t understand why people shoot game so would be somehow against it by default. This is magnified by the fact that we spend a lot of time on social media which can be a bit of an echo chamber and those who do oppose it are generally quite vocal on these platforms.

When speaking with people though, I’ve overwhelmingly found that most people do get it and are not against it at all, even when they don’t really understand how it works. Why? Because the majority of people eat meat and accept that it’s another way of producing food.

On the odd occasion I do come across somebody who doesn’t agree with it, I like to listen to find out the reasons why so that I can respond accordingly and have a grown up conversation about it. For me, mutual respect and friendly debate is always the way forward and I’ve lost count of the number of times I’ve managed to change people’s views with some basic education.

Pheasant shooting isn’t cruel because game birds are able to live a free range and wild existence as opposed to a lot of other birds reared for food. There are many conservation benefits of managing land for game shooting and it also provides an economic lifeline to isolated, rural communities.

Let’s explore this in more depth where we’ll answer some important questions. 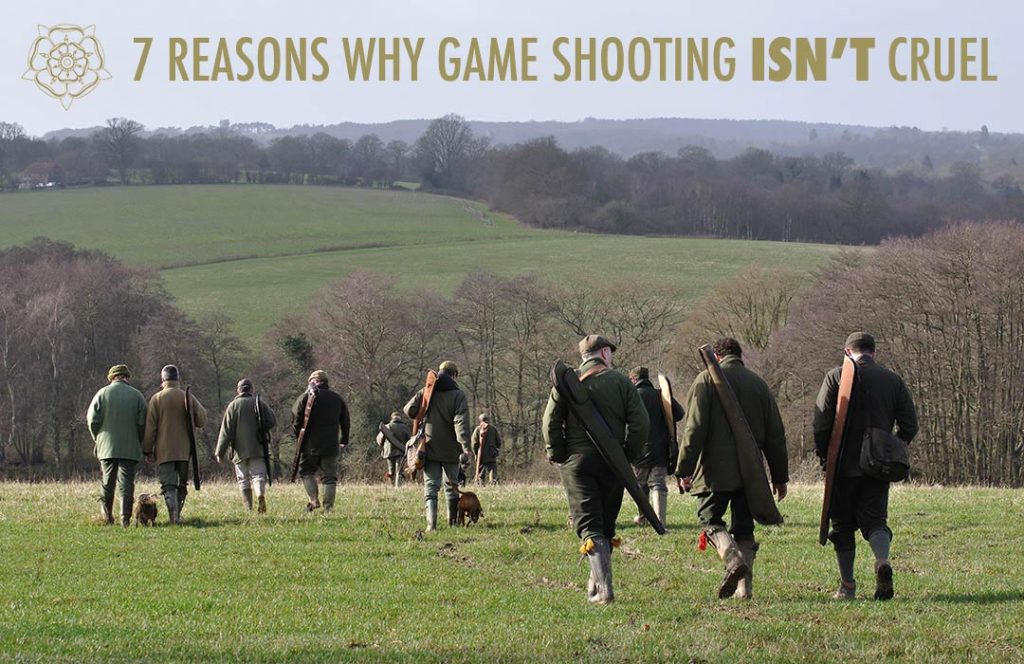 Reason #1 – Game birds live in much better conditions than many other birds that are reared for food:

Game birds such as pheasants are reared in their natural habitat – around the edges of woodland and agricultural land. They grow up in a true free range environment where they can wonder around and fly to wherever they please. The same can not be said for intensively raised birds such as chickens.

Government guidelines for the stocking density of briolers (chickens raised for meat production) is 33kg per square metre. At an average weight of 2.2kg at the point of slaughter, that’s 15 chickens per square metre. Just visualise a square metre and imagine what 15 chickens would look like within those dimensions, it’s not a lot of room.

Compare that to the release pen guidelines by the Game & Wildlife Conservation Trust who recommend a maximum of 1,000 pheasants per hectare of land. That’s 10 square metres PER BIRD! Pheasants are kept in release pens initially to protect them from predators but once they are able to fly and roost in trees, they’re free to come and go as they please with vast areas of woodland and farmland as their playground.

Reason #2 – Managing the land for game shooting is real conservation and it allows many other species to thrive as a result:

Did you know that heather moorland is rarer than tropical rainforest? Those of us living in the UK are very lucky as 75% of remaining habitat is found here.

To conserve this precious environment requires careful management and it’s the game keepers on grouse moors who have the knowledge to carry out this management. 217,000 acres of heather has been regenerated in England over the last 30 years thanks to grouse moor owners and their game keepers.

Along with predator control, this has allowed red grouse and other ground nesting bird numbers to flourish. In parts of England and Scotland, a survey of upland breeding birds found that densities of redshank, golden plover, curlew and lapwing were up to five times greater on moors managed for grouse shooting compared with moorland that was unmanaged.

To learn more about grouse moor management and the conservation benefits it brings, I recommend having a read of this report by the Moorland Association.

97% of all edible game shot in the UK is for human consumption (source: BASC ‘The Value of Shooting’ Report). Not only is game meat low in fat and high in nutrients but it’s tasty too. If you’re looking for 100% free range food then look no further than game meat.

Trying to eat healthy? Eat game, it's low in fat & high in nutrients.

Louise Gray is a journalist who recently decided to spend a year reconnecting with nature by shooting, stalking and fishing to produce her own food. She has written a book called The Ethical Carnivore about the experience. Here’s what she had to say on the topic of sustainable food production and understanding where meat comes from.

Reason #4 – It brings rural communities together:

Game shooting takes place around some of the most isolated communities in Britain. A day’s shooting can see local guns, gamekeepers, beaters and pickers up all come together to enjoy the atmosphere.

Not only is it good exercise but it provides a sense of camaraderie and community spirit with the end result being some of the finest, free range meat there is.

There is also the economic value to these communities – employment on shooting estates provide vital employment options where other employment opportunities are severely limited.

Unlike intensively reared birds, for birds that are the quarry on game shoots death is not certain. Low flying birds or birds out of range will not be shot at. When birds are in range and are shot at, there’s no guarantee of them being hit and many fly on, untouched by shot. There’s no getting away for chickens and turkeys in a commercial production line system.

Reason #6 – Game shooting brings people closer to nature and where their food comes from:

Meat is not grown in plastic trays by supermarkets. People are becoming disconnected to where their food comes from and a lot of the time, they don’t want to think about it, they don’t want to make the connection to an animal. Some are even happy to spout throwaway lines such as ‘game shooting is for tweed wearing toffs who just like to blast poor birds out of the sky’ and then go to Tesco and buy the cheapest chicken they can find without even thinking about the welfare of the animal when it was alive. This is pure hypocrisy.

People who shoot have a lot of respect for their quarry, they want to see a clean kill with minimal suffering. Eating something you have shot yourself is a feeling that a lot of people will never experience and it’s sad because this is where the respect comes from. You don’t want to see any of it wasted. When buying meat from a supermarket, the same connection just isn’t there. In the UK, 312,400 tonnes of poultry alone is thrown away annually. Unfortunately, we don’t have the research to show how that compares to shot game birds but if I was a gambling man, I’d bet a significant amount that as a percentage, it would be much lower.

Reason #7 – The economic value of shooting:

Just because something generates revenue it does not mean it’s ethical. Hopefully the points above demonstrate that game shooting is indeed ethical and I want to come at the economic side of things from a slightly different angle – conservation.

This sort of investment and management would not be possible without the revenue generated by shooting. Many alternative uses for the land managed for shooting would simply not generate the same amount of revenue and therefore investment in conservation would drop significantly. As a result, our landscape and the wildlife that depends on it would suffer and nobody wants to see that happen.