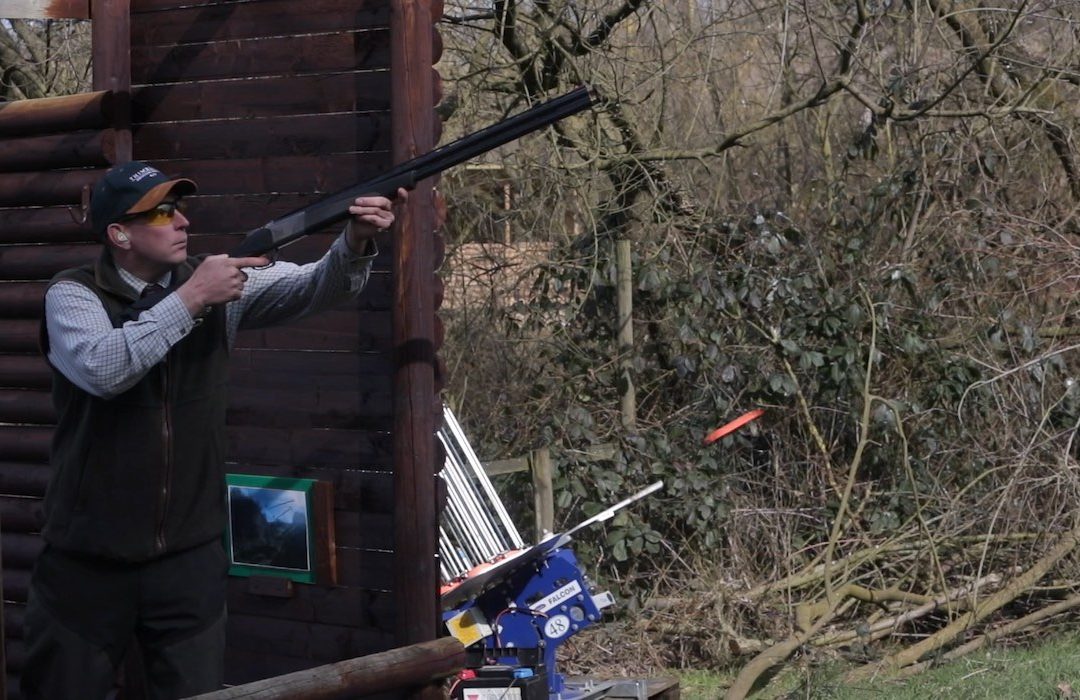 Newcomers to the amazing world of clay pigeon shooting can sometimes feel overwhelmed at the sheer number of things to learn about. Not only do you have an array of disciplines (and sub-disciplines) to choose from but on top of that, you must learn about safety, equipment, shotguns and then how to hit a few clays along the way!

In this guide, we’ll be addressing that last bit – how to shoot clay targets more consistently. Lots of information will be shared about how to properly shoot a shotgun and by the end, you should have a good understanding of the fundamental building blocks and techniques of successful clay pigeon shooting as well as some takeaway tips. 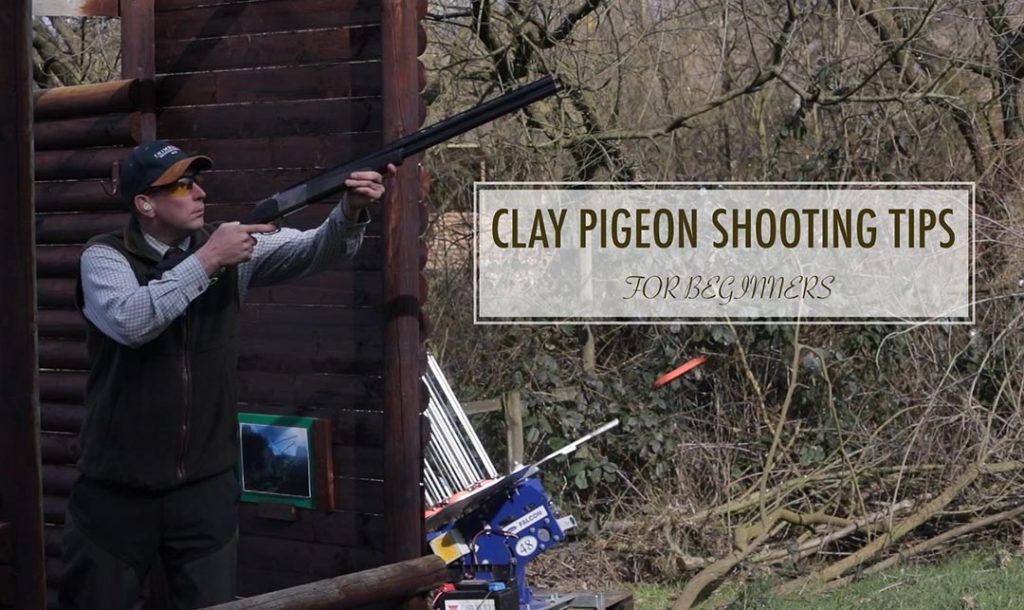 The starting point to shooting consistently well is making sure that all the fundamentals are in place. Unlike rifle shooting which is aiming a static gun at a static target, shotgun shooting requires movement and therefore requires the gun to be pointing wherever it is you may be looking (ie the target, always).

To emphasise the importance of locking your eyes onto the target, just think about any other sport which requires one ‘thing’ to hit another ‘thing’. Tennis, squash, baseball, cricket and even football is relevant here. Let’s use tennis as the prime example.

The ball is served by your opponent and it’s travelling towards you at speed. Not for one second would you consider taking your eye off that ball. Yes, you need to move your body, swing your arm with your racket and connect with the ball but your focus never shifts from the ball to the racket. Why? Because as soon as you take your eye off the ball, your brain can no longer calculate its speed and line of travel which are key elements to sending the correct signals to your body to connect with the ball. If you shifted your focus onto your racket, the chance of you missing the ball increases exponentially.

When you’re playing tennis of course, you keep your eye on the ball and hit it without looking down at the racket subconsciously and this should also be the case when you’re shooting a clay target with a shotgun – keep your eyes locked onto the clay throughout the whole movement and don’t look at your gun’s rib or bead, at all.

A common beginner mistake is locking onto the target as it’s moving through the air but right at the last minute, just before pulling the trigger, looking at the bead in relation to the clay to make sure that the lead looks correct. This results in the gun being stopped, the swing being ruined and the clay being missed.

You must obsess over locking your eyes onto the clay and only the clay from the moment you pick it up to the moment it breaks into tiny pieces. Always the target, never the gun.

So, with that established, the next piece of the puzzle is to make sure that your gun is pointing where your eyes are looking. It’s OK obsessing over staring really hard at the clay but if your gun isn’t following your eyes, we have a fundamental issue.

There are three things that must be correct for your gun to be pointing where your eyes are looking. You can think of these things like the three legs of a tripod – as soon as one is weakened, the whole thing falls over. Each ‘leg’ relies on the other two ‘legs’ for stability (and in our case, the gun pointing in the right direction).

The first leg of the tripod is eye dominance. Everyone will either be right eye dominant, left eye dominant or they will have central vision. It’s so important to establish this early on in your shooting journey as it can cause you endless issues if for example you’re cross dominant (ie left eye dominant but a right-handed shotgun shooter shooting off your right shoulder). 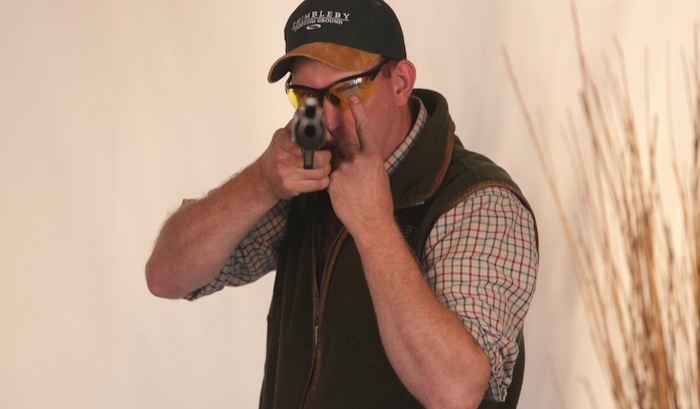 To learn more about eye dominance and some solutions to fixing any issues you may have with it, have a read of our dedicated article on this topic: eye dominance.

Think of a well fitted shotgun as more of a tailor-made suit than a shop bought one.

Gun fit can get quite technical and of course, we’ve covered that in the past here: gun fit. Have a read and make sure that your gun fits you properly and is not ruining your shooting.

The third leg of the tripod is gun mount. You could have nailed your eye dominance and gun fit but if every time you mount your gun it’s in a slightly different place, this is a serious chink in your armour.

The key to gun mount is consistency. You must be able to mount the gun in the same place every time and that requires muscle memory. To build up that muscle memory, you must practise your mount. How should you do that? Read our guide: Gun mount.

Stance is important because when done correctly, it can give you the maximum amount of movement needed to pick a target up, follow it, apply the lead then follow the shot through once the trigger is pulled. The movement needed for those steps will vary depending on the type of target being shot but on some targets, the movement can be quite a lot and if your stance is not correct, it could restrict your movement and cause you problems.

Stance is also important for balance. Your base must be strong enough to move smoothly and accurately.

To help visualise this, let’s continue using the clock concept… 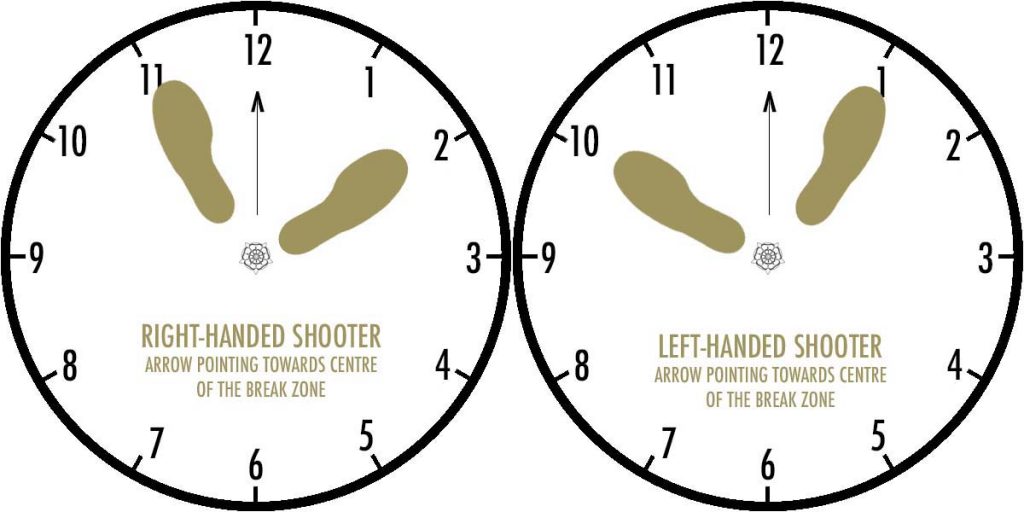 Your leading foot should be bearing around 60% of your weight when in the starting position. Depending on the type of target, that weight distribution could change as you take the shot and in some extreme cases, you could end up with a significant weight shift from one foot to the other but the 60% is a good starting point. The starting position should also see you leaning slightly forward with your nose over the front end of your leading foot.

How to Shoot a Moving Target

As mentioned earlier, shooting a moving target is different to shooting a static target. A shotgun is therefore not aimed like a rifle but is instead it’s pointed. If your gun is pointing where you’re looking (ie ‘the tripod’ is correctly setup) then what your eyes are looking at during the process of taking the shot suddenly becomes very important. Let’s explore that further starting with the different points you need to establish when looking at a target you want to shoot successfully.

When a clay is released from the trap, it will be travelling at 80 – 90mph. This means that if when you call pull your eyes are looking at the trap, the clay will whizz out and you’re then playing catch-up with your eyes and gun trying to get onto it. Instead, the thing to do is to establish what’s known as the visual pick-up point – the point where you first see the target as a solid object (ie not a fuzzy blur).

Once this is established, this will be the point where your eyes are looking as you call pull and you can be confident that by the time you see it, it will be a solid object and you can then start to move your body to get onto it with your gun. A tip here is to mark an object in the distance at your visual pick-up point so that you can go back to it for subsequent shots and maintain a consistent way of shooting that particular target.

The next point to establish is the break point/zone. This is where you want to break the clay, and several different factors need to be considered to decide where this point should be. Those things include the path of flight, the wind, any obstacles that may be present and importantly, a zone that gives you enough time to properly establish the line and speed of the target and apply the correct amount of lead.

Although the gun hold point is always somewhere between the visual pick-up point and the break point, we establish it last because as a starting point, you can use the half-way point between the other two points as your gun hold point. It can then be moved slightly closer to either depending on what works for the particular target you’re presented with.

Why does the gun hold point need to be in a different place to the visual pick-up point? Simply because there’s a delay between your eyes first seeing the target and then your brain sending a signal to your body to start moving the gun. Holding the gun at a point after you first see the target builds in an allowance time to allow your body to react.

The next thing we need to cover is lead methods. There are three main methods of lead that can be used – swing through, maintained lead and pull away. All have their uses, pros and cons. Instead of a written explanation of each of them, here’s Malcolm Dunn, a CPSA qualified instructor explaining a bit about each method.

Putting it all Together

As you have probably realised, being successful when shooting clay targets isn’t about quick tips and tricks, it’s about building a solid foundation and implementing the best practises we’ve covered in this article.

Once these are in place, you will have put yourself in the best position to start tackling each target at the clay ground and working out the nuances of how each one should be shot.

If you’re looking for more guidance on how to shoot specific targets, have a look at our online course Shotgun Shooting Success. Not only does it contain video lessons on how to shoot 10 common clay targets, there are another 10 video lessons on that which covers everything in this article in more detail. Right now, we’re giving away two free lessons which you can get here.