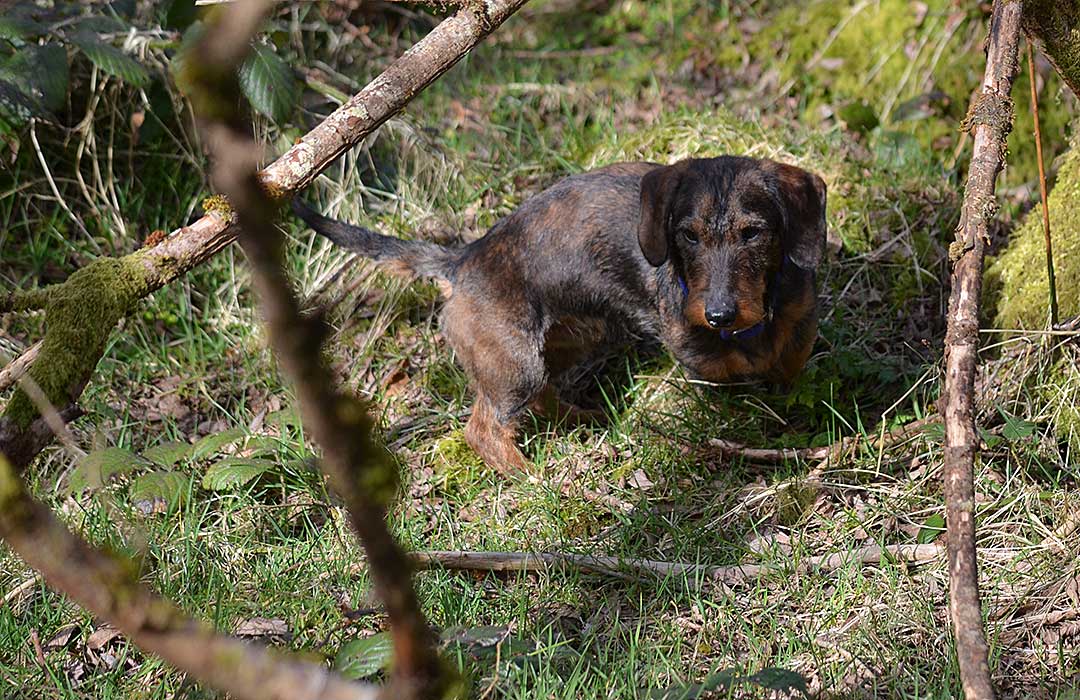 The Teckel – The Most Versatile Working Dog?

* To listen to Steven talk about his teckels and his sporting life in Ireland, see episode 32 of The Country Gent Podcast where he’s our guest *

The Wire Haired Dachshund, Working Sausage Dog or the Teckel? Maybe you’re not quite sure what they’re called. One thing you can be sure of however, is that these small dogs, long on the back and short on the leg are one of our most useful and versatile breeds of all small working dogs. As a result, they’re quickly gaining in popularity in both the UK and Ireland.

Teckels can work at everything from ratting to blood tracking and flushing foxes from cover to working on the beating line. They’ll even retrieve shot birds.

According to the Teckel Society, Teckels were first founded in the UK in the 1970’s. It’s in the last couple of decades however that they have risen to popularity as a working breed. The Teckel breed has long been the “go to” dog in Europe where, as well as being worked in a wide variety of ways and at a wide variety of quarry, most owners also participate in tests and trials ranging from retrieving ducks from water to trailing a blood scent which can be up to 40 hours old.

What is a Teckel?

Teckels originate in Germany and range in size and coat. The three different sizes are:

Within these three sizes we also find smooth, long and wire haired varieties with the wire being the most recognised and worked on our shores. I work my own at various disciplines which includes shooting. With my own Teckels I have flushed and shot pheasants, woodcock, Snipe, Grouse, Ducks and rabbits amongst other quarry.

Shooting over Teckels in Ireland

It was a beautiful September morning when I awoke in my lodgings to the sound of a dozen or so working Teckels getting excited and ready for a days hunting in the West of Ireland.

Our host had some months earlier invited us down to open the season with his pack. After a very welcome and fantastic hearty breakfast, I took my own pair from the truck and we loaded another half a dozen into a land rover along with two Lurchers – my own bitch Bella and her uncle Finn owned by my pal Greg who had also came down for the weekend.

I was still groggy as we drove along the winding roads and lanes. We had not arrived the night previous until after 9pm and we ended up going out lamping for “an hour or so” and did not return home until almost 4am. Here we were just a few hours later back on the road again.

The Teckels whined and yipped in the back, they knew full well what was coming. Among the dogs and bitches as well as my own two sat a little Dog imported from a breeder in Germany, sporting a GPS tracking collar that was almost bigger than him. His quiet demeanour gave little clue to the iron heart and tenacity that lay below that great wire coat. 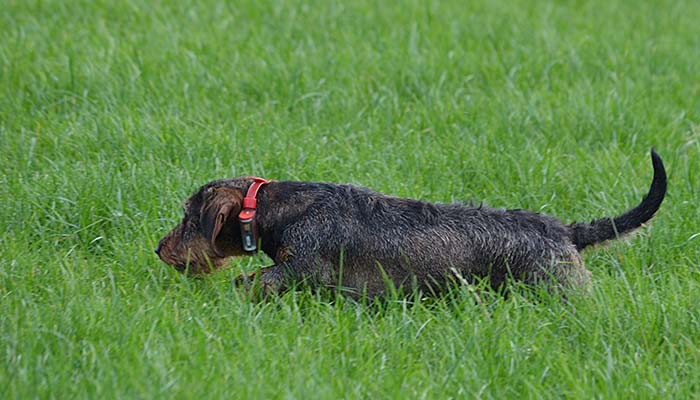 We pulled up on a narrow road which was almost a track and as I loosed the Lurchers, the Teckels were unboxed and leashed up for the short walk along the road and then onto a lane where they were too loosed so they could run alongside the Lurchers. They checked here and there along the ditch before three or four began to give tongue at a feral cat which instantly got up a tree out of harms way! My own Teckel Oscar seemed a little disillusioned with the entire affair as being a little over two years old, he has only until now been a lone ranger and never hunted as part of a pack.

Our host directed us to a large oak tree to the east of a large forestry block and the guns were stationed West. Our host headed off into the trees and overgrown cover before disappearing out of sight.

Within minutes the entire pack began to speak and it really was beautiful to hear them. Teckels have a very deep and powerful bay, deeper than a Beagle I would say but very much of its own note. Standing out on the rolling pasture below ancient hardwood trees with dew still on the ground while the Teckels bayed at the top of their lungs really made the hair stand on the back of my neck.

As the baying moved further and further back a shot rang out on the far side and I suspected we had a fox accounted for as the music dipped for a short while. My Lurcher Bella was on a slip lead and we tried our best to remain out of sight as the baying came our way again, hoping for a Fox to break the cover and make its way across the field where either myself or my pal who was stationed slightly further up with his own Lurcher may get a chance for a slip.

As I sat on one knee with my right arm around my little bitch, the baying got louder and louder as did her heart which as the Teckels approached I thought for a second it was going to come through her chest!

She flinched momentarily as something crashed through the ditch in front, and as I lifted my head to look I realised it was my own Teckel quickly followed by one of the older bitches. The pair bumbled along the tree line when another three or four spilled through the hedge in front of them and quickly took another line and bayed hard and fast over the brow of a hill. As we followed, we found them marking a large fox earth.

The gun that accounted for the Fox appeared and recounted what had happened. The fox initially broke cover and went back in, but the Teckels pushed him hard and as he broke from the cover and crossed the open field, the Gun shot him cleanly and down he went. It turned out to be an old dog fox. The Teckels wasted little time and made back for the wood to draw again.

We moved on to a second area and with the day starting to warm a little, the dew was fast disappearing and the scent was possibly going with it. The guns were stationed and our host placed myself and Greg to one side of a large covert where a fox usually broke.

The pack hunts here regularly in winter and the farmer is always glad to see them along as they keep the raging fox population in check. As our host reached the top of the cover I heard the occasional twig snap, with a yip thrown in here and there for good measure until they again spilled out on my left-hand side, ran along and went back in.

No baying this time and my young Lurchers’ heart rate remained steady! My oldest Teckel strangely appeared at my side and with a few older bitches searched hard for 10 or 15 minutes but it appeared as though the foxes had long left this piece of ground, for this morning at least.

We ambled back to the truck with the Teckels walking at heel and I kept one of my own on a long lead as he more often than not decides that he is not finished hunting and will run on past the truck at the end of a walk!

Our third (and as it turned out final) covert for the day was in the middle of a very large field. The sun was now high and the temperature was up.

I left my coat in the vehicle and this time gave my Lurcher to Greg as I felt that one of my own dogs was not just packing well with the rest and our host thought that perhaps him being huntsman and “stranger” caused the dog some concern and he was quite correct.

As both he and I approached the cover and I loosed my own Teckels, they joined the others and within seconds of entering they again began to speak. This time as it was a smaller area, it seemed a lot louder and a lot more excitable!

They were moving fast and straight through the centre of the cover as we ran along the outside to keep up. We had a gun stationed in the next field where the fox would make for and a pair of Lurchers stationed straight behind the cover, so he would have nowhere to go.

The baying got louder and louder a fox broke just as we reached the end of the cover. He headed straight towards where the lurchers were stationed and then quickly broke left and ran along the inside of the ditch, flushing two rabbits in the process.

I assumed he would break again to the right but he went straight through left and with all the Teckels behind him giving tongue all the way. What a sight it was, the Lurchers peering from the edge of cover on slips, the sun beaming down over a beautiful green field, the huntsman running behind and the great sound of the Teckels in the air.

Eventually after going left, they appeared again in the wood behind and began to hunt round, they were obviously hard on the fox’s tail. The Lurchers were now loose and he was obviously under a lot of pressure as they too crashed through the wood in search of him.

It suddenly went very quiet. Myself and our host walked quietly through the wood, and firstly found one of my Teckels and then another. Then we met a couple of others and eventually the GPS tracker led us to a very large, very deep looking and very difficult earth.

It was quite literally a giant stone, under which at some time in years gone by the foxes had widened an old rabbit burrow and it quickly became clear that the small, quiet and unassuming little dog was in there somewhere! It was lunchtime and we thought he might either bolt the fox or leave.

In fact, we were wrong on both counts and it was almost 6 hours later and with a lot of rock chipping, digging and good luck that they recovered the small, quiet and unassuming little dog, who was covered in soil, was hungry and tired but very happy indeed.

What a day it had been, two foxes accounted for and what was just an opener for the season. I look forward to meeting up with the pack again later in winter, and must thank them once again for their great hospitality.