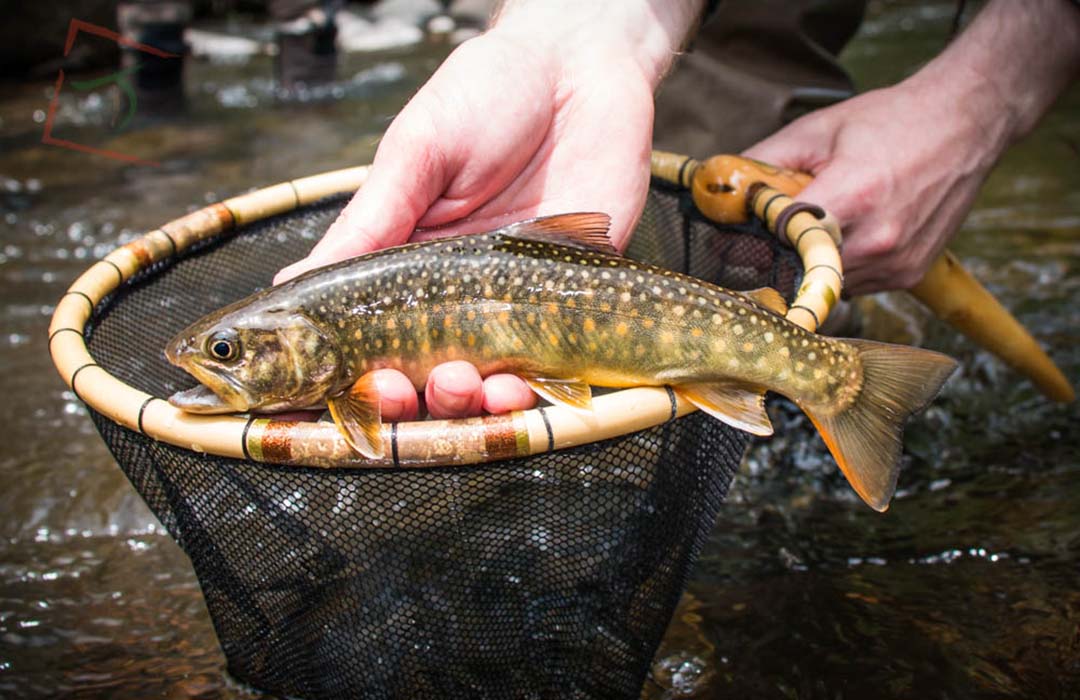 “Tenkara” is the traditional form of Japanese fly fishing. Although you can make a literal translation that means “From the Heavens”, at least one origin of the word is a local term for flying insects in Akita prefecture (with variants including tenkara, tegara, tengura, tenkarako or tenkako). So, “fly-fishing” in that area has the direct translation “tenkara-tsuri”. Despite its far-flung birthplace, tenkara turns out to be a fantastic fit for the trout in our home rivers too.

Fishing in this way consists of a long, supple rod (no reel), a casting line attached to the tip of the rod and a short section of nearly invisible “tippet” line joined on to a fly. That is it.  Without any additional weight, and with some surprisingly long lines of maybe 20 feet or more, the angler must use a genuine “fly-casting” technique to propel the line and the simple artificial fly accurately to the targeted fish.

But before getting too carried away, it is probably good to note that the actual method LONG pre-dates the name; and it was originally simply a way to survive. In fact the modern word is much more appropriate as a way of describing the hobby version of this fishing style that began to emerge somewhere around the 1960s…and one of the most fascinating aspects of that hobby is how the historic ethos of practicality and minimalism carries strongly through from its historic roots.

Tenkara is a fly-fishing game that values and rewards deep knowledge of nature, stream-craft and the skill to use completely stripped-down equipment successfully. That welcoming of constraints leaves the angler unencumbered with gear – and free to express their technique. There is no scope for gadgets to hide or compensate for a lack of skill or knowledge.

At the same time, the simplicity of the gear means that a beginner can easily pick up enough of the basics to have a good time and enjoy some success on stream – and probably with less frustration than that experienced with rod and reel “western” fly fishing. Just like the old saying goes “Five minutes to learn and a lifetime to master”.

To understand modern tenkara, then, it is helpful to look at the conditions and situations that shaped its historic practices. Today, just as in the past, Japan is dominated by forest-covered mountains (that is why the cities are so densely populated – there is not much flat ground to build skyscrapers!).

Those mountains have a long tradition of hardy hunters who would make long expeditions to bring back the resources needed in settlements. As well as the “Matagi” – hunters of bear and deer – there were also the “Shokuryoshi” who caught char (“iwana”) and trout (“amago” and “yamame”) for themselves and mountain villagers. These were the professional anglers whose skills and approaches shaped the ethos of tenkara.

They used whole bamboo canes for rods and made casting lines by twisting together strands of stallion’s tails. Their flies were originally tied on sewing needles heated and bent into fishing hooks and, if they could get it, tippets were made from silkworm gut; the most expensive part of their kit. That tippet material was valuable, so keeping it wet (and so less brittle) may have contributed to tenkara becoming a “wet-fly” tradition; where flies are fished below the water’s surface. Interestingly, Yorkshire has its own wet- fly tradition of “North Country Spider” fishing and this is likely to be a descendant of European “reel-less” methods that look incredibly similar to tenkara.

Another effect of the expense of tippet and the need for efficiency was a reluctance to cut the tippet and change flies unless absolutely necessary. This is probably the driving force behind the development of tenkara’s multiple – highly distinctive – fly manipulation techniques. Instead of changing flies, skilful tenkara anglers change what they do with their simple flies in order to alter what they imitate. This is a big departure from our standard approaches in western fly fishing.

Running through this history are the values of self-reliance, mobility, stream-craft, a preference for changing technique before changing fly and a deep knowledge of nature. These exact same values carry strongly through into the modern “hobby” form of tenkara. They are a big part of the attraction and come directly from the restrictions, challenges and constraints faced by the Shokuryoshi. Tenkara is now a wonderful game for folks who are drawn to elegant, skilful simplicity and who like to explore.

Of course, many modern tenkara rods are made from ultralight graphite – although there seems to be a resurgence of interest in traditionally-made Japanese whole (not split) cane rods just now. This is true for many branches of Japanese angling, not only tenkara. However, the undeniable lightness, portability and performance of modern graphite rods which telescope down to a mere 20 inches or so (and the convenience of the simple line and lack of reel) are incredibly attractive for anglers seeking to be mobile and unencumbered.

The simplicity, portability and ability to achieve good presentation with the light lines and long rod probably explain a good proportion of the popularity of tenkara since it was introduced to the west in 2009 by Daniel Galhardo (the first person to produce rods and distribute them outside of Japan).

That low barrier to entry (you don’t need a fortune to get a well-balanced rod and line) and the relative ease of getting a fly to a fish with a passable presentation is certainly a good reason to try tenkara. But what keeps people “hooked” is the scope for lifelong skills-development and the rich cultural context. A growing tribe of passionate tenkara advocates around the globe can testify to that. Perhaps it is ironic that this most traditional Japanese cultural export is now thriving because of the connections allowed by the internet – and modern social media platforms in particular.

For me, it is the mix of elegant, technically and culturally rich activities surrounding authentic Japanese tenkara that now makes it my preferred method when fly fishing in flowing water. This is true whether fishing at home (and the Yorkshire waters that are home to the North Country Spider tradition are fantastic venues for tenkara), but also when travelling to Italy, the Czech Republic and of course Japan and beyond. That global tribe aspect also affords some fantastic opportunities for friendship – fuelled by good booze and wonderful food! Perhaps even more so than the fishing itself, it is those fundamental pillars of quality of life – friends, food and fine drink that really fuel my own tenkara addiction?

Probably due to pure mischief on my part, I do also love the fact that it is so very effective on the seemingly incongruous waters of the English Chalkstreams. Yes, tenkara is a beautiful match for our Dales rivers – and all upland, rain-fed rivers. But it has proven to be incredibly effective on the crystal-clear lowland chalkstreams where I’ve tried it too (most recently Wiltshire’s River Wyelye – with great success). Maybe this is not a complete surprise when you consider that delicacy and accuracy are key features of tenkara. However, the deviation from close-copy dry (floating) flies certainly does raise a few eyebrows on lowland waters – and there are a small number of clubs who do not allow the method within their definition of “fly fishing”.

Once you are sure that it is allowed on the waters that you fish, the method is surprisingly adaptable – although targeting trout, char and grayling species in cool, tumbling rivers is tenkara’s real sweet spot. In the UK, trout ranging from a few ounces up to around three (or even four) pounds are very comfortable targets with a properly-matched rod and tippet with good fish-playing techniques. However, if you wanted to define another sweet spot for tenkara in terms of fish-size, this would probably be in the small fish to somewhere around two pounds range.

What, then, makes tenkara different from western rod and reel fly fishing? Well, the standard equipment clearly shows some very obvious differences; but the distinction is made on more than just gear. The use of simple, impressionistic fly patterns – and the focus on changing presentation more than changing fly – goes some way to defining the flavour of tenkara. Another feature is the aim of holding all the casting-line off the water whenever possible (a characteristic it shares with some modern, competitive fly fishing methods – as well as traditional “reel-less” British and Continental European methods). All of those methods feel very different from the regular approaches of shorter fly rods and relatively heavy fly line laying on the water’s surface. For me, I think it is probably the rich array of (often named) fly manipulations along with a deep understanding of how to use even the most subtle features of currents and eddies in the stream that give tenkara its uniquely addictive feel.

To understand that sensation, you really need to try it for yourself – and because the minimal gear makes your level of technique brutally apparent – there is huge benefit in having a good grasp of authentic techniques that have been honed in Japan. Until recently, you would need to speak pretty good Japanese – and also have contact with just a small number of specific experts in Japan to be able to shortcut that learning curve…

This is why I, along with John Pearson, founded a school of tenkara fishing in the Peak District – based on our regular research and training visits to Japan to study under the best tenkara anglers in the world. We have our own club waters that are, we believe, the very first “Tenkara-only” river fishery in the world (even in Japan, rivers are typically shared with fly fishers and – often – bait anglers and spin-fishers too). At the same time, we created “Discover Tenkara” to support anyone who wishes to learn authentic, effective techniques. Our latest project – called “Tenkara in Focus” is a free Online TV show that brings you interviews, on-stream tuition, tips & tricks as well as tenkara stories from around the world. Through a mix of (extensive) free tutorial material and a growing library of video and written information products and courses, we help you make the very best of your valuable time on stream.

Why not check out our free resources? You’ll find a large number of informative blog posts as well as cultural and historic information and what we believe is the most effective free email training course in the world for giving you the same advantages we were lucky enough to stumble upon ourselves. You can jump right in and, if it isn’t for you, simply unsubscribe by clicking the link in any email you receive in that series.

If you’ve any questions, I’d be delighted to answer them if I can on pg@discovertenkara.co.uk or @PaulNGaskell on Twitter.