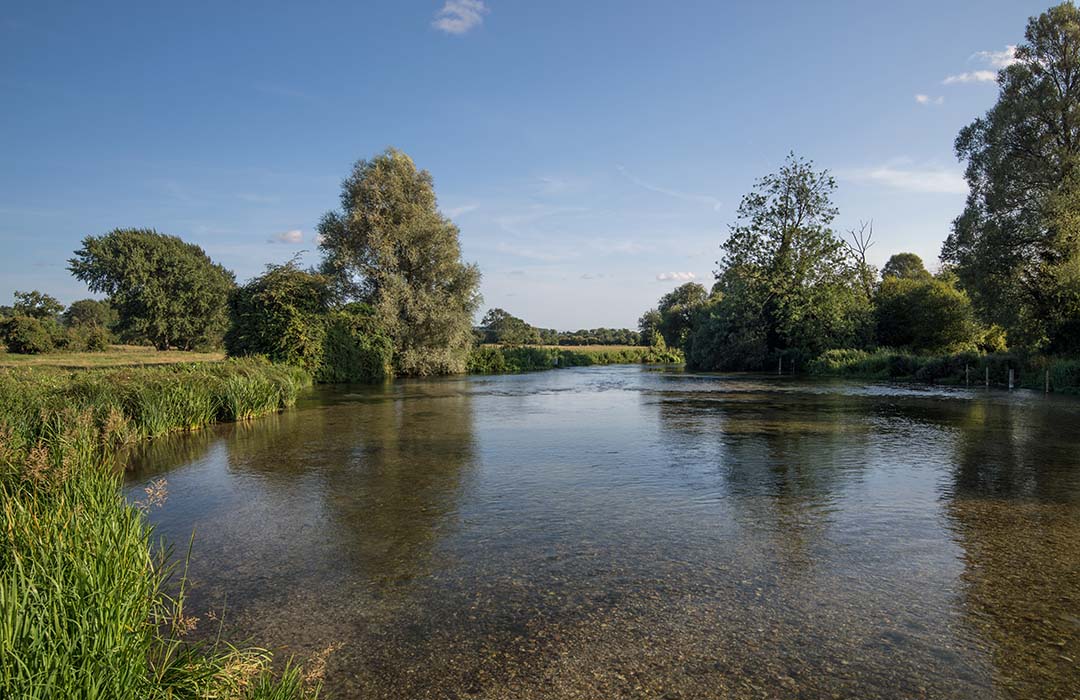 Thought of by many as the cream of English angling, chalk stream fly fishing is undeniably very special.

With crystal clear water, lush bank side vegetation and rich invertebrate life, chalk streams are beautiful places which to the delight of the game angler, support big trout and grayling for which sight fishing tactics can be employed.

If you wish to improve your chalk stream fly fishing success or have only ever fished rain fed, spate rivers but want to learn more about chalk streams then this introductory guide is for you. 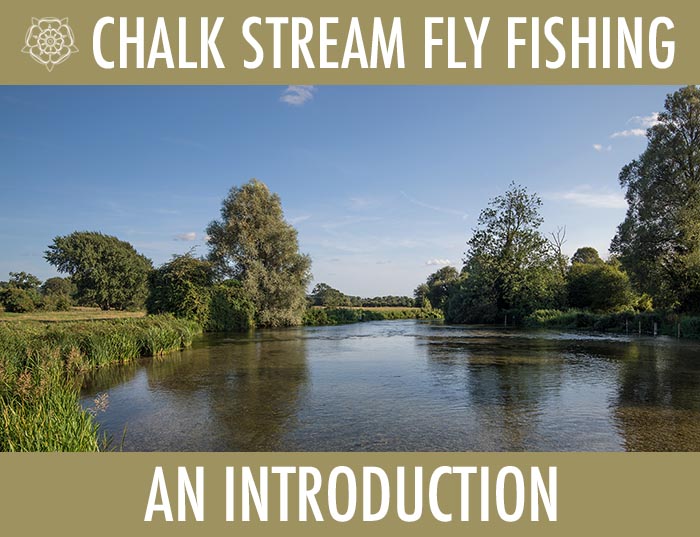 What is a Chalk Stream?

First, let’s start with what a chalk stream actually is.

Unlike freestone rivers which are rain fed, chalk streams are fed by freshwater springs. These springs are formed by groundwater on chalk hills filtering down through the chalk to ground level where it collects to feed the river.

Chalk is an aquifer meaning it’s porous. It acts like a sponge and water can move through it. The channels in which the water moves through are called fissures. Because the chalk is so porous, it regulates the flow of the spring and therefore the river which is why chalk stream river levels are more consistent than freestone rivers who’s levels rise and fall relatively quickly depending on rainfall.

For the fly angler, something very special happens during the process described above. When water filters through chalk, it becomes gin clear, alkaline and collects dissolved nutrients and minerals. This supports an amazing ecosystem which includes an abundance of fly life. This of course equals big fish and great sport for the angler.

How Many Chalk Streams are There?

Worldwide, there are around 200 chalk streams. Staggeringly, over 85% of these can be found in England. Like heather moorland where 75% of the world’s population can be found in Britain, we have a responsibility to protect it.

Some of the most well known chalk streams for fly fishing include:

Driffield Beck is the most northerly chalk stream in England.

How to Fish a Chalk Stream

The good news for those who fish freestone rivers is that the main techniques still apply – it’s still river fly fishing after all! However, in a lot of cases, only certain methods are allowed on chalk streams which is due to the rules of the clubs that run the fishing on them.

This section is intended to serve as a starting point to approaching a chalk stream as opposed to a comprehensive guide to river fly fishing.

As mentioned above, there can be strict rules in place on some chalk streams. In some cases, nymphs and other sub-surface flies can be banned which will mean fishing dry fly only.

Some clubs do allow nymph fishing though which will give you another option but do check the rules of the water you’re fishing. Some will actually state that nymphs can be used but only from a certain month, normally July or August.

Also check to see if you can wade or it’s fishing from the bank only. Wading is advantageous in that you have more presentation options available to you but if it’s not allowed, there’s probably a good reason for it so stick to the rules.

Upstream dry fly fishing is perhaps the first thing that comes to mind when thinking about fishing a chalk stream. Because of the rich invertebrate life, fly hatches and therefore dry fly sport can be phenomenal.

Like with any river, matching the hatch is always a good place to start. Sitting by the river and observing is never time wasted. To help you workout what might be hatching, the following table shows what you might expect at any given time during the trout season. It’s worth noting that this is a not a comprehensive list and all fly species may not be present on all streams. As a quick guide though, it should prove extremely useful.

First Mayfly of the season on the river today…. pic.twitter.com/OYvX0Ksnwe

Because the water is so clear on chalk streams, sight fishing with a dry fly is the most visual form of fly fishing there is. Not only can you see the fish your targeting but you get to watch the take on the surface too.

Don’t be fooled into thinking this is going to be easy – remember that the easier it is for you to see the fish, the easier it is for it to see you. The best advice is to fish upstream (so the fish is facing away from the direction in which your moving towards it), use a long, degreased leader and move slowly if you’re wading. Because trout have lateral lines, they can detect differences in water pressure – ensure that your wading does not alert the fish to danger.

Another trap that you should avoid falling into is thinking that because chalk streams are less ‘riffly’ than freestone rivers, you don’t have to worry about complex currents and therefore drag. Spotting and avoiding micro drag can be the difference between a take and a refusal. It’s fairly obvious where you should be casting your fly to – just in front of where the fish is rising. The thing that you should be thinking more about is where to cast from. Aim to get as close to the fish as possible without spooking it in a place where you are confident that micro drag will not be an issue.

Nymph fishing on chalk streams really started at the beginning of the 20th century when G.E.M Skues was promoting the merits of his upstream nymphing style of fishing chalk streams. Wet flies in the north had been used for generations but on the southern chalk streams, dry fly was the only accepted method. At this time, Frederic Halford was the one banging the drum for the dry fly and the two men fiercely defended their chosen methods in the sporting press. That’s for another article but needless to say, many believe that Skues is the founder of modern day nymph fishing.

Frank Sawyer was another well known chalk stream angler (and river keeper) to champion nymph fishing. The Pheasant Tail Nymph and Killer Bug flies were his inventions and both flies are still extensively used today.

When it comes to nymphing tactics, you will normally find that rules state single, upstream nymphing tactics only must be employed. Fishing with two flies on a French leader doesn’t really fit with the ‘chalk stream tradition’. When fishing a gin clear chalk stream though, you’re normally targeting fish you can see so a single fly and a proper fly line is actually the best setup for that sort of situation.

The best flies for chalk streams are the ones that imitate the natural flies the fish are feeding on. Use the hatch information above to give you a starting point.

If you’re looking to put together a fly box that will do you a whole season on a chalk stream then the following flies should serve you well as a core of the box. Variations of colour and size could be added to give you more options.

Although a lot of chalk streams are controlled by clubs and syndicates, day tickets are available on some beats. You can find more information on the following websites:

www.mulberry-whin.com (for those wishing to fish a chalk stream in God’s own county…)

To finish this introductory guide, here are a couple of stunning videos to whet your appetite! Tight lines.