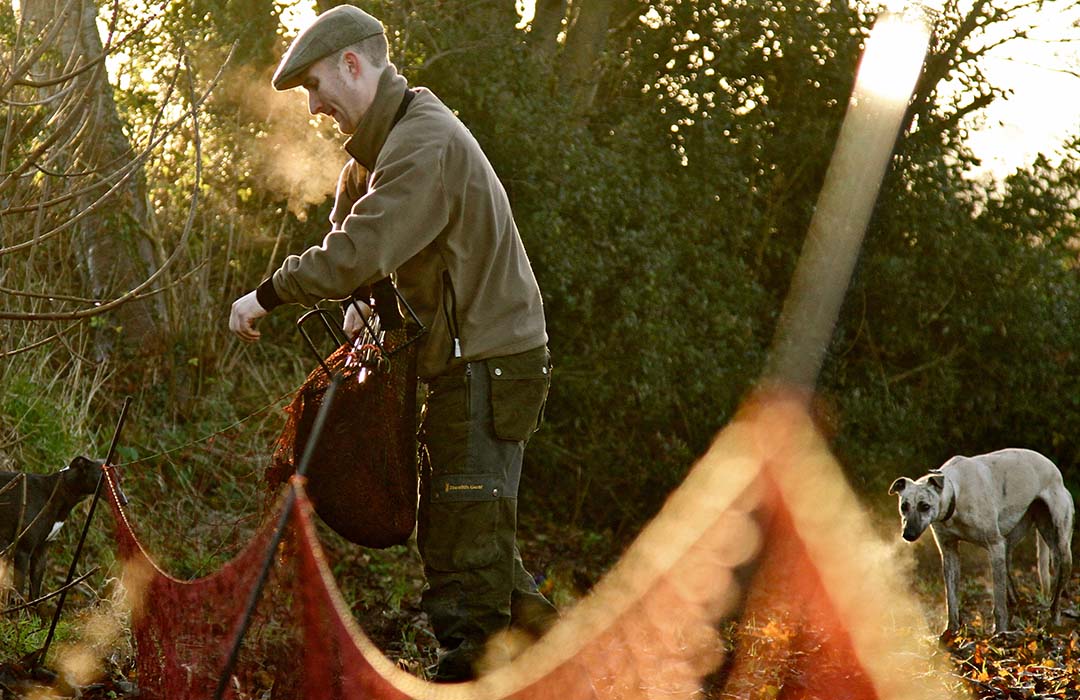 Long Netting for Rabbits: Tips on How to Use a Long Net Effectively

For me there can be little more satisfying than a good night’s netting, even should that night only amount to one mere rabbit in the bag or even none! It matters little because getting out and dropping a few nets regardless of the bag is the most important thing.

I have enjoyed some nights that we caught several dozen rabbits with a couple of one hundred yard nets, and others when I slipped a net across a break in the ditch and winkled one rabbit the whole evening, but one is as satisfying as the other, and sometimes the one or two that are harder to get are even more so.

The Long Net hasn’t really changed much over centuries, one recent writer described the “Quick Set” method as being the only change in quite a few. However, medieval paintings would suggest otherwise and there are several which depict what could be argued as a “quick set” method of long netting taking place around the 15th Century.

My home district in Northern Ireland was famous for rabbits right across the world and exported the finest skins available on the market up until the 1950s. The fur quality was due to a particular plant that grows only in this area and gave the rabbit a unique shine.

During the plantation of Ulster, the area was given to the hat makers company of Strabane for its vast quantities of rabbits and quality of fur. Monthly trade fairs were held where rabbits were sold by trappers and netters, and prices were haggled over pints of ale. Arguments were settled by men called “Castors” who were referees or ‘judges of price’ if you like, between buyers and sellers.

These rabbits then went on to be exported with the bones remaining in Dublin to be made into the glue. Some of the meat remained with the rest sent to England, and the majority of the skins ending up in Paris for the fur trade. It is said that due to the quality of the skins, they commanded three times the price of standard rabbit skin and were held in such high regard that they were at times counterfeited with sellers claiming their skins were from the same area after being “shined up” with a certain powder to give them an extra sheen!

These exported rabbits were nearly all Long Netted, the reason being that nets don’t damage the fur as might a trap or snare. A net was easy to obtain or make, and several could be carried without much trouble even on a wet night. Of course, it was possible on the right ground and conditions for large quantities of rabbits to be bagged for a nights work, because there really is little more effective than a long net on the right ground being worked by a skilled netter to catch rabbits.

The early nets, certainly the only type used in my youth was the traditional long net – a net with a mesh size of 2 1/8” from knot to knot, making it 4 ¼” when pulled corner to corner. They were usually made from nylon but earlier nets could have been made from anything that got the job done. Hemp, Irish Linen, and silk would have been popular before the advent of modern nylon. These nets were about 15 meshes high and often came in lengths of 50 or 100 yards as they do today, with a 100yrd net requiring 200yrds of mesh, slack, bag, or what the Victorians called “Kill”.

If we have too much slack, the rabbits won’t hank up well in the net, not enough and they simply bounce off. The edge of the net has a “Selvedge” which is a double sewn edge to prevent the net from fraying when it is pulling on its running lines which today is usually 6mm braided white nylon.

A net, on running lines, is then placed on endpins, crooks, or shanks depending which part of the country you come from and these are used to carry and run out the net, with one pin being placed in the ground and the netter (or runner) walking towards where he wants to end up. Letting the net drip off the pins, he can then either place the pegs as he goes or have a friend (known as a pegger) come behind him. The pegs for a traditional Long Net can be made from anything suitable, but for most netters, it is a Hazel wand no thicker than your index finger and has been cut in October and seasoned for a year. The length should be from under your arm to roughly the tip of your finger.

In recent times, we have seen an explosion in the more modern quick set net – a method developed by Scottish Long Netter, snare man, trapper & in my opinion the UK and Irelands foremost authority of Long Netting, Glen Waters.

The quick set method is the traditional method but with the poles attached to the net. At some stage after Glen’s original method, someone (Perhaps him) came up with the idea of a basket which hangs around one’s neck, which allows the net to be easily carried around and run out and in very quickly, hence the name the “Quick Set” method.

The poles on a quick set are usually made of fibreglass, 8mm in diameter, and topped with a grommet for your safety! I once took a friend to casualty with a fibreglass long net pole protruding from the back of his arm at 3am on Saturday morning. The net which had very fine fibreglass poles with no grommets was being run out when he slipped while lifting it going downwards on a hill. He landed on the pole which went through his shirt and then his arm. The situation took a little explaining at the hospital but after having it removed, he was fine!

The quick set method is simplicity itself to run out and is used in the main by ferreters wanting to save time and avoid the laying of dozens of purse nets. It can be a fantastic and great time-saving method if you are working large open expanses of warrens and use the occasional “stop net” (short long net) to break up larger areas. Couple this with some ferrets and a keen lurcher and you have the sport of kings for a morning!

Working a long net by night, traditional or modern is not a difficult task. My belief is that the hardest part of long netting nowadays is finding ground to do be successful on, but assuming you have this in place then you are already winning.

The best advice anyone ever gave me was to check over your netting ground during the day. Where are the rabbits feeding? Where are the burrows and assuming you get a night with suitable conditions, is there somewhere you can access through and run a net between the rabbits and their warren? That is the crux of netting, you are simply placing a net between the rabbits and where they want to go, it’s as simple as that. Your work is in getting the conditions right and getting into a position to run that net out without much fuss.

For me personally, for a night time rabbit foray I choose to carry 2 x 50-yard traditional rabbit nets along with the leg of a pair of old army trousers stitched at the bottom with a cord loop to carry my pegs much like a quiver. I am not a massive fan of using quick set nets at night. Although I have and do use them, I find them sometimes bulk to carry and pull through hedges, and at times I feel they can be a little noisy, although this can be reduced by padding the hoops on the basket a little with some heavy tape.

Putting it into Action

Let’s say for example that we’ve arrived at our netting ground and it’s shaped like a football pitch shaped and of a similar size, with the wind blowing from the East. The rabbits are feeding in the middle of the field and the warrens are to the far left or the west side of the field as we might say. All is required now is to access the field from either the west side, south, or north. The wind is blowing from the east which is taking your scent off the rabbits entirely and assuming you work slow and steady you should have no problem getting 2 x 50-yard nets between the rabbits and the warren.

You set your net and let’s assume that you are at the top (North) of the area. It is necessary now to beat (or bant) the rabbits back towards the warren, so we must re-enter the field with the wind coming from the east. As soon as the rabbits catch your scent on the wind they will be on alert and as soon as you begin to drive them towards the net, they will be on their way.

The Victorians has a preferred method using what they called a “Dead Dog” which was a spool of cord run across the field between the runner and pegger, and was dragged along making a whooshing sound and sending every rabbit straight for the burrow – this method could not be heard beyond the field and was a very stealthily way of working. Nowadays (assuming one has permission), it is no problem to shake a box of matches or slap your hat on your leg while moving in a zig-zag fashion, but even then, this will not shift every rabbit and it does no harm to go back over twice as many will sit tight and squat to the ground even as you walk close by.

Assuming your net is in the right place, you have it pegged or run out correctly, it is of the correct mesh size and there is sufficient slack, you should eventually reach your net to find the top line bouncing with the struggles of a few well hanked up rabbits. All that’s left to do is quickly dispatch them, take in your net and move onto the next spot.